Email: This email address is being protected from spambots. You need JavaScript enabled to view it.
Thursday, 01 October 2020 15:52

Imphal, 01 October 2020 ( Evening News ) : Screening of outsiders are on halt at COVID-19 Screening booth in Jiribam's Babupara due to cease-work strike by outsourced staff. People coming from Assam were stranded owing to the same this morning. Eventually, Security personnel screened them using Infrared Thermometer. Chief Medical Officer of Jiribam District, Dr E. Okendro said Health department officials along with 6 Outsourced staff used to work at the screening booth but now they are on 10 days of cease work strike since yesterday demanding to pay them befitted honorariums.

Imphal, 28 September 2020 ( Evening News ) : Today is the last day for hearing the election petition filed against Minister Okram Henry challenging his victory in the 2017 State general elections.  Justice of the High Court of Manipur MV Murlidharan will preside over the case. The petition was filed by Okram Henry's contender in the 2017 election from Wangkhei Assembly Constituency Yungkham Irabot. In his election petition filed at the High Court,  Yungkham Irabot claimed misconduct in declaring the 2017 election's result. Owing to this pending court case, it is still unconfirmed whether the Election Commission of India, ECI will approve conduction of by-election this November to fill up the vacant MLA seat of Wangkhei Assembly Constituency. 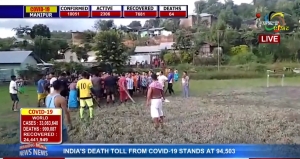 Imphal, 27 September 2020 (Evening News ) :  One person died and 23 were injured in a violent clash between two villages Aimol Chingnunghut and Aimol Khunyai under Machi Police station in Tengnoupal District regarding land dispute. Tengnoupal DC imposed curfew in both the villages to avoid further untoward incident. Impact News sources, the incident occurred around 4.30PM yesterday. The incident occurred when youths of Aimol Khunyai playing football on the controversial playground. Upon getting the news o conflict between the two villagers, Officers of Tengnoupal and Kakching District Police, top police officials and additional police forces rushed to the area and tamed the conflict. Police are still on strict vigil to avoid any unwanted incidents. The deceased in the incident is Pastor of Aimol Chingnunghut, Thangjalal son of Waneilal.

Imphal, 25 September 2020 ( Evening News ) : Newly appointed Minister Oinam Lukhoi has disclosed that an allied party of the BJP led Coalition Government might be ousted from partnership. He has added that out of the 4 members of the party, two have been already dropped and if the remaining two wish to withdrew their supports, they are most welcome. He added that the Government will be more than happy to have some empty space. O. Lukhoi was speaking to media on the occasion of his reception at Thongkhong Luxmi Bazar in Wangoi Constituency last evening. He also declared that he will recruit as many people as possible from Wangoi Constituency to various posts of various Government departments. Expressing pride that no person had become a Minister without being an MLA, O. Lukhoi proclaimed that more than 150 individuals of Wangoi Constituency have been recruited as Government employees as he supported the BJP Government despite winning the last Election on Congress ticket.  O. Lukhoi mentioned that he is ready to accept any portfolio and claimed to be the right hand of Chief Minister N. Biren. He also lauded those who had resigned from their MLA posts to save the Chief Minister. The Newly appointed Minister asserted that he trusted Chief Minister N. Biren enough to resign from his MLA post to work for the welfare of the State. He assured to make all out efforts to develop Wangoi Constituency.

Published in Political News
Tagged under
Be the first to comment!
Read more...
Friday, 25 September 2020 17:01

Deputy CM Y. Joykumar says NPP's stand will be taken along with NPP National President Conrad Sangma upon his arrival

Imphal, 25 September 2020 (Evening News ) : Deputy Chief Minister Y. Joykumar has said that NPP will take their decision on whether to continue supporting the BJP led State Government only after NPP National President Conrad K. Sangma arrives in Manipur.  In a telephonic conversation with Impact news, Y. Joykumar said that they have not made any decisions yet. It may be mentioned that in the 2017 general election, BJP won only 21 seats out of the 60 seats and they took support from the NPP, NPF, LJP, Trinamool Congress and Independent MLAs to form the coalition government. But BJP has been empowered after some Congress MLAs recently joined the party.  NPP legislatures had recently withdrawn their support but joined back in support of the BJP led government after a reconciliation meet. However, out of the 4 NPP Ministers,  2 Ministers namely Health Minister L. Jayantakumar and Fishery Minister N. Kayisii were dropped out of the State Cabinet yesterday against their earlier agreement.

Published in Political News
Tagged under
Be the first to comment!
Read more...
Page 8 of 194