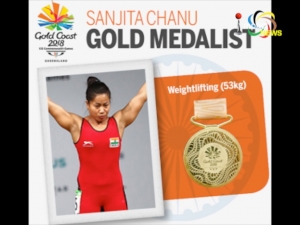 Imphal, 06 April 2018 ( Evening News ) : India has won its 2nd Gold medal on Day two in Women's Weightlifting in the ongoing Gold Coast Commonwealth Games, 2018. Khumukcham Sanjita Chanu of Manipur won the Gold in the 53 kg Women category today. She lifted a total of 192 Kgs. While Deepak Lather bagged a bronze - first for India at 2018 commonwealth games - in 69kg weightlifting Men category.  He lifted a combined weight of 295kg - 136kg in snatch and 159kg in Clean and Jerk. With this India has won 2 Gold and a silver. India now has four medals and all four have come from weightlifting. It may be mentioned Mirabai Chanu won the first Gold for India yesterday and broke the Commonwealth record in 48 kg category. Mirabai managed to lift 196kg in a remarkable effort. While P Gururaja bagged a silver mebal in Men's weight-lifting.

On the other hand The Indian Olympic Association, IOA, expressed happiness at the strong performance of the country's contingent on the opening day of competitions in the Commonwealth Games. It said the medal count will only go up in the coming days. India, one of the powerhouses of the Commonwealth Games, is being represented by 218 athletes this time. It may be mentioned the country won 64 medals (15 gold, 30 silver, 19 bronze) in the 2014 Glasgow CWG.

Imphal, 05 April 2018 ( Evening News ) : Irate students of DM College of Arts set ablaze desks and benches of the college against the non-fencing of the rear wall of the college and also locked up the gate of A-Block. Speaking to Impact News, General Secretary of DM College of Arts, Students Union,  Arambam Vikash stated that they had written to the Education Minister to put up fence in January and also had met the Chief Minister regarding the same. He expressed disappointment that the Government is still indifferent to their request. Vikash maintained that due to the absence of the fence, drug abusers frequent the college and expressed apprehension of becoming an infamous place. He also announced total shut-down of DM College of Arts from today against the indifference of the Government and also maintained that the construction work of PG Academic Block will be suspended with immediate effect.

Imphal, 05 April 2018 ( Evening News ) : Cleaning of Thongangbi canal in Langdum began today after a gap of 24 years. Addressing media persons, MLA Keirao Constituency, Lourembam Rameshwor asserted that cleaning up the bed of the canal will facilitate around 31 acres of paddy fields.  Rameshwor maintained that the unattended condition of the canal stretching about 7 KM from Langdum to Chanam Sandrok in Keirao Constituency has been causing inundation of the surrounding agricultural farms and houses during monsoons. Flood waters from the paddy fields in Thongangbi can now be easily drained in the canal with the cleaning of its bed. He also assured that the mini Tronglaobi barrage connecting Thongangbi canal and Iril river will be repaired by next year.

Imphal, 05 April 2018 ( Evening News ) : India has won one gold and one silver on the opening day of the Goldcoast Commonwealth Games today. Reigning World Champion Saikhom Mirabai Chanu won India's first Gold Medal. She won the coveted yellow metal in the 48 kg category with a total lift of 196 kg. Weightlifter P Gururaja opened India's medal account by claiming a silver in the men's 56kg category. The 25-year-old Gururaja, making his Commonwealth Games debut, equalled his personal best of 249kg to finish second in a field. Malaysia's three-time Commonwealth Championships medallist Muhammad Izhar Ahmed won the Gold, while Sri Lanka's Lakmal Chaturanga collected the Bronze. In men's team badminton competition, Indian shuttlers blanked Sri Lanka in a largely lop-sided preliminary clash of the event. In women's team table-tennis, India thrashed Sri Lanka 3-0 in a group match. However, in Women's Hockey India made a disappointing start. The team went down 2-3 to Wales, after trailing for most of the Group A clash.

Imphal, 31 March 2018 ( Evening News ) : The 42 hour General Strike called by Manipur Muslim Welfare Organisation commenced from the mid-night of March 30. The General strike affected most of the Muslim inhabited areas in the State. Supporters of the Strike clashed with Police in different parts of the State , Police fired tear gas shells and mock bombs to disperse the protesters. Manipur Muslim Welfare Organisation called the general strike from midnight of March 30 till 6pm of April 1 demanding establishment of a separate directorate for the Minorities, issue of white paper of the enquiry report of schemes under MOBC Department from 2010 to 2017, and  in charge that the MOBC has violated rights to PDS items of the minorities. The General Strike Supporters at Hatta Minuthong, Khsetrigao and Keirao Makting stopped the vehicles and the commuters plying on the roads. Clash broke out between the supporters and the police force at Keirao Makting. The Supporters pelted stones at the Police. The police deployed more forces to control the situation , failing which they resorted to firing tear gas shells and mock bombs to disperse the protestors. There has been no report of casualty so far.  The general strike is being imposed at Lilong Bazar,Thoubal Moijing Mina Bazar,Mayang Imphal Bengoon and,Yairipok.

On the other hand, supporters of the general strike called by Manipur Muslim Welfare Organisation destroyed a school van bearing registration number MN01X2383 carrying students. Stones were pelted at the Van with young students still inside the van causing much panic. The unfortunate  incident occurred around  6.30 early this morning at Hatta Minuthong. The vehicle was carrying students of pre Nursery to class 5 studying at Brighter Academy in New Checkon. The Van Driver Soubam Superman told media persons that around 20 to 30 general strike supporters attacked the vehicle near Hatta Minuthong. He said the protestors paid no heed despite telling them that the vehicle was ferrying school children.  All Manipur School Student’s Transporter Association has condemned the incident as unfortunate and urged the supporters of the General strike to make it very clear if there is any restrictions on vehicles carrying school students. General Secretary of the Association, Jimmy Tongbram strongly condemned such misconducts of terrifying the young children in the name of a general strike.

Published in Breaking news
Tagged under
Be the first to comment!
Read more...
Page 12 of 181