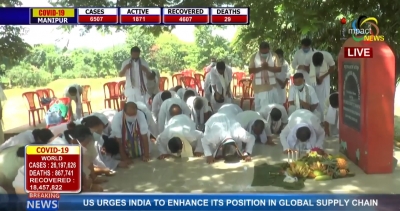 No objection to settlement of Indo-Naga Framework Agreement but it should be confined within Nagaland : UCM

Imphal, 03 Sep 2020( Evening News ) : United Committee Manipur (UCM) President Sunil Karam has said that there is no objection to the finalisation of the Framework Agreement signed between NSCN-IM and the Indian Government, however the settlement should be confined within the Nagaland State. He was speaking on the sidelines of Tarpon Heishoi ceremony performed at the sacred shrine at Kekrupat, organised by UCM today. Sunil Karam said the Union Home Minister assured Chief Minister of Manipur and COCOMI members on November 25 last year,  that stockholders concerned especially the people of Manipur will be consulted before the final settlement of the Indo-Naga Framework Agreement. He demanded the Home Minister to keep his promise and disclosed the content of the agreement which is expected to be finalised this month.The UCM President called upon people of the state to stand against any divide and rule policies and against any threats to the territorial integrity of Manipur. It maybe mentioned that a press release from the Prime Minister's Office had stated that the over 23 years long pending Indo-Naga Framework Agreement may get finalised by this September.

As in the previous years, United Committee Manipur (UCM) organised Tarpon Heisoi ceremony at the sacred shrine at Kekrupat today.  Speaking on the occasion, UCM President Sunil Karam called upon people of the state to always revere the courage and bravery of those forefathers who had laid down their lives for the motherland. He lamented that unlike the previous years, Tarpon offerings will be made only on the first and last day of the half month long traditional ceremony owing to the prevailing COVID-19 Pandemic this year.  Sunil Karam said today's tarpon offerings were made especially for the 18 brave-hearts who laid down their lives for the territorial integrity of Manipur on June 18, 2001 Uprising.  Family members of the martyrs and many women leaders took part in the ceremony.

Make sure you enter all the required information, indicated by an asterisk (*). HTML code is not allowed.