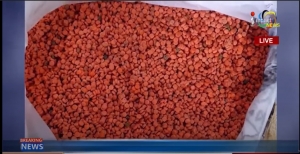 A team of Anti-Smuggling Unit of Customs Division, Imphal today arrested a man with contraband worth around 5 crore rupees at around 9.30AM.

Police has registered a case against him under the relevant section of ND & PS Act, 1985 for necessary legal actions. Investigation is also underway to nab others involved in the case.

Students' Union of Mayai Lambi College,Yumnam Huidrom has boycotted any activities in the college until the Government fulfils their demand for a qualified Principal.

The Students' Union has claimed that the current Principal in charge does not fulfil the required criteria or RR hence, hindering progress of the college. Reportedly, the students have already submitted a written request demanding the same to Education Minister S. Rajen but there is no response yet.

They have also complained that there is not a single teacher in the History department of the college.